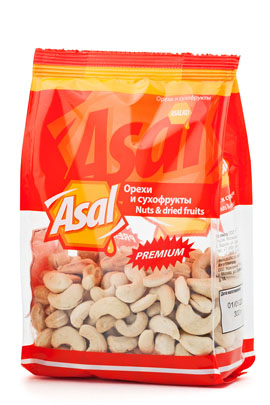 We offer you the biggest and the tastiest cashew nuts you could ever find.
The only ingredients are cashew and salt, no additives!

The homeland of cashew is north-eastern Brazil, that’s why till XVI century only natives of South America have been treating themselves to it. The Portuguese were first Europeans, who have tasted this exotic nut. After this, cashew had become widespread all over the world rather quickly. Nowadays cashew is being produced in 32 countries. 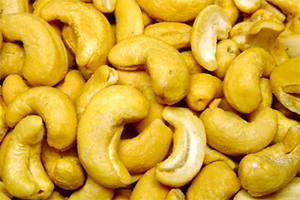 Cashew tree is an evergreen plant reaching 12 meters high. It is undemanding and grows everywhere, if it’s warm and wet. In spite of simple tree surgery and good cultivation, nuts are considered to be purely export produce and rather expensive, especially for natives. Cashews consist of two parts: the so-called cashew apple and the nut itself. The seed in a hard shell is found on the top of the apple. This shell contains a poisonous substance carbol, which can cause serious burns. So, before going on sale nuts are carefully come out from shell, whereupon, as a rule, they are processed a special thermal treatment up to full oil evaporation.
In countries, where cashew grows, it is used for hypertension treatment (Panama) and as antiseptic for wound cure (Peru). Cashew is also recommended as a supplement in case of toothache, psoriasis, dystrophy, derangements of metabolism, and anemia.