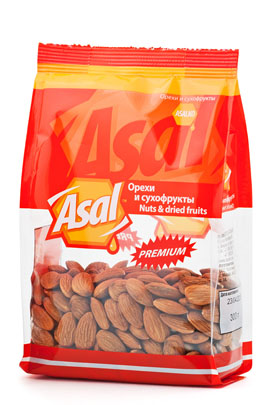 According to medical investigations, almond reduces the risks of Alzheimer’s and heart diseases. It also provides 35% of daily need in vitamin E.

During the mankind history almond has had a great religious, ethnic and social meaning. According to one of the legends, almond was born of Aaron’s abloom wand that has been the symbol of divine approval. The Romans strewed newly-married over with almonds as the symbol of fertility. The mentioning about this tree is also found in written works of Avicenna. Almond has become widespread all over the world thanks to travelers, who have been eating almonds during wandering across the Silk Road between Asia and the Mediterranean. An almond tree is rather branchy and reaches 4-8 meters high. Drupes lie in grey and green velvety peely shell which is easily peeled off when the fruit gets ripening. As a result, the stone called an almond nut becomes revealed. 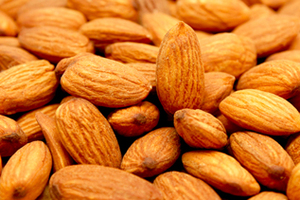 According to amigdalin content making it bitter, almonds can be divided into sweet and bitter. If the seed contains up to 3-4% of amigdalin, these nuts mustn’t be eaten. Those kinds of nuts, whose seeds don’t contain amigdalin and in which the bitterness isn’t tasted, are referred to sweet. It’s almost impossible to distinguish a bitter almond from a sweet one, although the first one usually has more solid stone. Among other nuts almond is a record-holder by the content of calcium and vitamin E that has a positive influence, first of all, on cardiovascular system. In folk medicine the nut successfully helps in treatment of anemia, pancreatic diabetes, and diseases of respiratory apparatus. Nowadays California (the USA) is a leader in almond export all over the world. About 80% of the world almond export accounts for a fraction of California.

There are the following types and calipers of almonds: